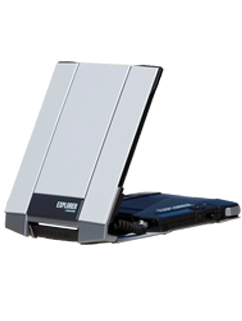 TT-00-3723A Cobham Explorer 710 BGAN HDR Portable Broadband Satellite Terminal
A low-end VSAT capability in a portable BGAN form.
At the forefront of a new era of high speed ultra-portable satellite streaming, EXPLORER 710 is a sophisticated communication tool for broadcasting and other IP based industry applications.
The Cobham Explorer 710 BGAN delivers an expected streaming rate of about 650kbps with its full channel option for higher quality video news gathering.
This is the smallest class 1 BGAN terminal, and the first to use the new BGAN HDR (Higher Data Rates) service platform from Inmarsat.
The Explorer 710 has streaming capabilities that make it ideal for live video broadcasting from any location on the globe.
SOLAR PANEL USE requires a minimum capacity of 65 W, 10-32 VDC.

Explorer 710 Portable Carry Broadband Satellite BGAN Terminal
As the world’s most advanced Class-1 BGAN terminal, the EXPLORER-710 will be the first to take advantage of Inmarsat’s new HDR-streaming service.

Leading Edge
The first and only BGAN terminal to support the new on-demand streaming service from Inmarsat. With speeds at 650 kbps the EXPLORER 710 sets a new standard for mobile video news gathering. Double the speed with plug and play bonding – simply connect two EXPLORER 710 terminals with an ethernet cable and achieve streaming rates over 1 Mbps.

Explorer 710 – Greater Bandwidth & Portability for Live Video Streaming
BGAN is accessible via a range of small, lightweight satellite terminals, which provide performance options to suit different operational needs.  They can be used both indoors and outdoors, being robust enough to withstand challenging environments and extremes of temperature. The smallest terminals are designed to suit single users, for whom portability is a key consideration. The larger terminals offer a WLAN capability and are particularly suitable for small teams that need to establish a temporary office for an extended period. They are also suitable for users requiring higher bandwidth to enable applications such as live broadcasting. Vehicular systems comprise an interior terminal and discreet tracking antenna, which is mounted on the vehicle roof. They provide access to voice and high-speed data while ‘on the move’.